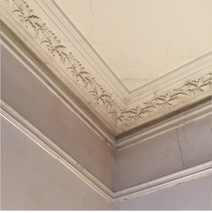 International spread of Victorian Period Plaster Mouldings
During the 18thcentury, a few English architects immigrated to the colonies, but as the British Empire became firmly established during the 19th century many architects emigrated at the start of their careers. Some chose the United States, and others went to Canada, Australia, and New Zealand. Normally, they applied architectural plaster coving styles that were fashionable when they left England. By the latter half of the century, however, improving transport and communications meant that even remote parts of the Empire had access to publications such as the magazine The Builder, which helped colonial architects keep, informed about current fashion. Thus, the influence of English architecture spread across the world. Several prominent architects produced English-derived plaster coving designs around the world, including William Butterfield (St Peter's Cathedral, Adelaide) and Jacob Wray Mould (Chief Architect of Public Works in New York City).
At Decor mouldings, the Victorian coving and Victorian cornice are the most popular plaster products we supply. These period plaster coving cornicing bring an air of decadence and class to any room. This style of plaster coving cornicing typically has many ridges, curves and deep inner cove along with a long projection onto the ceiling and a shallow depth. Victorian plaster coving cornicing also helps to improve the property value of your room, which explains why it is often used by building companies, property developers and people looking to move up the property ladder.
Each design has a brief description along with information on suitable ceiling heights.

Design of the Period House - By Era
In this area at Decor mouldings , we look era by era at the architectural design styles used.
In almost every era we find more than one style being popular. Even when the design cognoscenti, or the wealthy, favour one style, we find vernacular architecture or the homes of people in ordinary towns and cities borrowing from current plaster coving and past styles.
It is rare to be able to label any house as being of a single style. The typical middle or working class home was built by a small builder who would buy a plot of land, build one or two houses and immediately sell them freehold or leasehold to a landlord.
This speculative builder built what he liked, was familiar with and could sell easily and profitably. These houses were influenced by contemporary fashions but were no more 'designer houses' than the typical house of today. 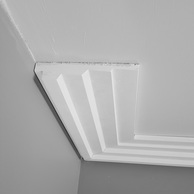 Art deco coving
Art Deco Style plaster coving cornicing
The Art Deco coving style plaster cornicing developed in France between 1908 and 1912 and then spread to the rest of Europe reaching a peak between 1925 and 1935.In 1925, Paris was the location for the Exposition International des Arts Decoratifs et Industriels
Modernes; this gave us the name 'art deco'. The exhibition was meant to occur in 1908 but kept being postponed until 1925.
The objective was to be 'modern' hence 'style moderne'. Themes are escapism, fantasy, speed and glamour.
As decorative or artistic style plaster coving cornice it was used in buildings in the moderne style but also in decorative features in other styles. Influences were ancient Egyptian, Aztec and Chinese motifs and patterns, including sun ray designs, chevron motifs and zig zag patterns.
As an architectural style, the proponents, such as Le Corbusier, argued against decoration and saw buildings as machines, stripped of decoration, focused on fitness for purpose. Designs are hard, brutal, with no compromises for comfort and homeliness.
The Art Deco decorative coving style initially featured rounded motifs, such as foliage and flowers, but later these became more abstract and geometric, such as sunburst patterns. Some designs indicated speed with strong lateral lines, often tapered. House-owners decorated their houses with fireplaces and furniture, wallpapers and fabrics in Art Deco designs. Ultimately the Art Deco style split; in France it persisted as a decorative style, elsewhere as a
minimalist design as the modern style and in the USA as 'jazz modern'. Both developed through the 1920s and 1930s, influencing with each other.
In Great Britain the style persisted largely in furniture, wallpaper and fabrics, and also in decorative plaster coving cornice and ceiling roses. In the USA Art Deco flourished in architecture, particularly in commercial buildings. 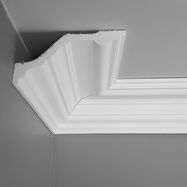 Edwardian coving
Design of the Period House - 1900-1919
The two decades between 1900 and the start of the First World War are called the 'Edwardian' period, although strictly this means from 1901 to 1910, the reign of King Edward VII. The Queen Anne remained in vogue into the early Edwardian period. The influence of the Arts and Crafts movement meant that vernacular traditions remained but new styles were adopted, including a new version of English 18th century classical, in other words neo-Georgian. The wealthier patrons of architects and designers persisted with French classical styles, particularly Louis XVI.
As in the later part of the Victorian period, it is hard to label most Edwardian houses as being of a single style; they fall into the category of 'Edwardian eclectic', with a mix of styles and ideas. The typical middle or working class home was built by a small builder who would buy a plot of land, build one or two houses and immediately sell them freehold or leasehold to a landlord. This speculative builder built what he liked, was familiar with and could sell easily and profitably. Writers continued to attack this jumble and looked for a new national style. However, pure Arts and Crafts products were too expensive and not available in sufficient quantity. Many furniture and building products were therefore machine-made, influenced by Arts and Crafts coving styles. The mock-Tudor, 'Tudorbethan' cottage architectural style appeared from the late 1890s but was scorned by 1910. Needless to say, it persisted, and has continued to the present day. Meanwhile, the battles between the designer camps continued; Art Nouveau - and its Scottish variation - was reviled by Walter Crane.

Edwardian Style plaster coving cornicing
The Edwardian coving styles is a version of the Victorian Eclectic style. Houses in this style took ideas from the medieval and Georgian periods, the Arts and Crafts and Art Nouveau coving styles, among others, mixing and matching many influences. Houses had wider frontages so there was often more room for a hall; in larger houses this was even used as a living room. For example it would be furnished with a desk and perhaps even a fireplace.
The underlying themes of buildings and interior design of the Edwardian era were for expensive simplicity and sunshine and air. Colours and detailing were lighter than in the late 19th century, looking back to the Georgian era of a century before. The desire for cleanliness continued. As gas and then electric light became more widespread, walls could be lighter as they did not get so dirty and looked better in the brighter light. Decorative patterns were less complex; both wallpaper and curtain designs were plainer.
There was less clutter than in the Victorian era. Ornaments were perhaps grouped rather than everywhere. Displays of flowers were placed to complement the floral fabrics and wallpapers.

Design of the Period House - 1830-1869
The middle decades of the 19th century saw the decline in the use of Classical features and the rise of Gothic, moving from round-topped windows and shallow pitched roofs, to pointed arched windows and steeply pitched roofing. The neo-Gothic architectural and decorative style was in its heyday between 1855 and 1875. However, Classical features kept returning in the 1830s and in the 1850s with French-style towers, turrets and domes. The 1850s and 1860s saw the architectural style called variously 'Italianate', 'Roman', 'Romantic Classicism' or 'Free Renaissance', as popularised by Queen Victoria's Osborne House.

Thank you for visiting!